On March 4, 2010 the U.S. District Court for the District of Columbia agreed that FDA was within its rights to grant Shire’s Vyvanse (lisdexamfetamine dimesylate) NME status and thus, 5-years exclusivity.

New Rivers Pharmaceuticals (NRP) was the original sponsor of the lisdexamfetamine NDA. During the 2/23/2007 approval, FDA determined that the API was a new molecular entity (NME) and granted the product 5-year exclusivity, thus preventing the filing of an ANDA until 2/23/2012. [5-year exclusivity bars filing an ANDA until the exclusivity expires.] Actavis Elizabeth filed suit against FDA in February 2009, claiming that FDA erred in its determination that lisdexamfetamine is an NME and that FDA should accept its ANDA filing immediately.

First, what is a prodrug? It is not defined in FDA regulations. A working definition states that prodrugs are:

So, the question boiled down to what constitutes a new molecular entity.  This was the FDA’s statement to the Court:

“Lisdexamfetamine consists of dextroamphetamine bonded covalently to lysine through an amide bond. Lisdexamfetamine is a prodrug that is metabolically converted to produce dextroamphetamine, which is responsible for the drug’s activity. Under FDA’s regulation at 21 CFR § 314.108, a non-ester covalently bonded molecule is considered the active moiety of a drug and, if not previously approved, it will be considered a new chemical entity entitled to 5 years of exclusivity. A non-ester that requires metabolic conversion to produce a previously approved active moiety is considered a new chemical entity. Because lisdexamfetamine is a non-ester covalently bonded molecule, and because it requires metabolic conversion to produce dextroamphetamine, lisdexamfetamine is a new chemical entity and is thus entitled to 5 years of exclusivity.”

The Court agreed that FDA was within its rights to make this judgement.  So let’s turn to the question of (b)(1) or (b)(2).

NRP established that lisdexamfetamine is transformed by hydrolysis into amphetamine, an active that has already been approved in the U.S. (Figure 1). A major driver behind what makes the NDA a (b)(1) or a (b)(2) is where and to what extent the prodrug converts into the active moiety. In this case, where does lisdexamfetamine transform into d-amphetamine?  The following table shows possible classifications of prodrugs: 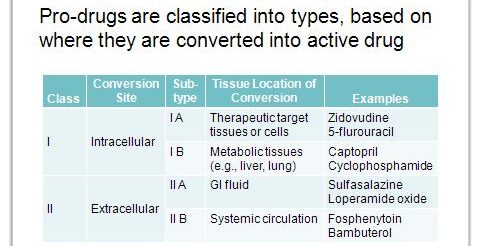 In this table, prodrug of class I are most likely (b)(1)’s – the prodrug itself provides all (Type IA) or most (Type IB) of the efficacy and safety of the drug product.  To determine which class and type of a prodrug, pharmacokinetic studies are generally employed.

NRP conducted a pharmacokinetic study to examine the extent of hydrolysis (Figure 2). The results show that there are measurable amounts of lisdexamfetamine (denoted as lysine-amphetamine in the legend) in systemic circulation several hours after oral administration. Because the conversion is not rapid in the GI tract and occurs over time in the systemic circulation, the NDA is a  505(b)(1); both the prodrug and metabolite are involved in the drug activity. Yet, the FDA approval documents contain numerous reviewer comments that d-amphetamine was a reference product.  Adderall and Dexidrine were used as pharmacokinetic comparators: NRP seemed to believe that it could use literature for tox data.  But, based on the pk study in Figure 2, which showed appreciable circulating lisdexafetamine the FDA asked for tox in juvenile rats and dogs. In the end, most of the safety and efficacy information for Vyvanse came from Sponsor studies, making this a 505(b)(1).