How would you like to get an NDA approved without conducting any clinical studies?

Premier Consulting presented a poster on literature-only 505(b)(2) New Drug Application (NDA) approvals at the recent 2016 AAPS annual meeting and exposition in Denver, Colorado. Individuals from the FDA and the pharmaceutical industry attended this session. Literature-only NDAs have become more prevalent in recent years and can be a time- and cost-saving mechanism for sponsors to gain approval of certain categories of drugs, particularly those with long histories of clinical use or a wealth of available safety and efficacy data available from public sources. This post describes the findings from our analysis of literature-only 505(b)(2) NDAs using Premier Consulting’s proprietary database.

The 505(b)(2) NDA application allows for approval based on reliance on studies that were not performed by or for the sponsor, possibly leading to faster, more cost-effective drug development. Often, 505(b)(2) applications utilize some combination of published literature, reliance on prior efficacy and safety assessments of a previously approved drug (a Listed Drug, or LD), and sponsor-performed clinical and/or nonclinical studies. However, 505(b)(2) approvals are also possible without reliance on a LD or sponsor-conducted studies. These literature-only NDAs, based solely on published literature, represent a unique opportunity in drug development that forgoes any new studies conducted for approval and relies entirely on publicly available information.

We searched Premier Consulting’s proprietary 505(b)(2) database to determine whether there were common characteristics among approved literature-only NDAs and to determine the basis of these approvals. The database was queried for NDAs that did not require clinical studies for approval and then the results were further screened to eliminate any NDAs that relied upon an LD.

FDA review documents were evaluated for each NDA identified that met criteria (no clinical studies; no LD), using a question-based approach. Key questions included the following:

(1) Drugs that are unethical to study prospectively (ie, radioactive products or products used to treat radioisotope poisoning), and

(2) Drugs with long histories of clinical use that are marketed unapproved (i.e., DESI).

While no pre-approval clinical studies were needed for approval of these 14 NDAs, some had Phase 4 commitments, including nonclinical studies, testing for extractable/leachable chemicals, pediatric requirements, and patient monitoring. 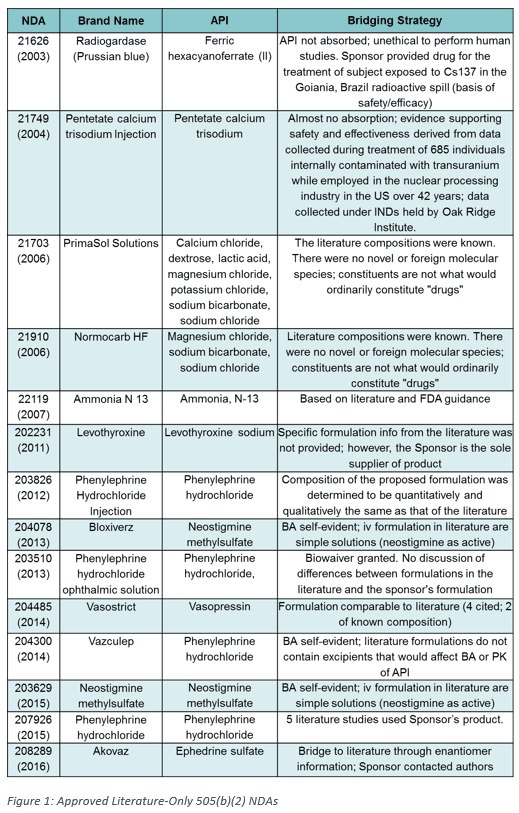 In many of the NDAs we assessed, information in the literature was sufficient for bridging and Agency approval. However, we noticed a couple of cases, wherein additional formulation information has been requested for the published literature. This resulted in the sponsor contacting study authors to identify the formulation information necessary for approval or the sponsor identifying studies from the published literature that specifically involved use of the sponsor’s proposed product. While this observation could be due to the specific APIs under review, it may also reflect a change in Agency policy.

Nonclinical studies were infrequently required. Of the 14 literature-only NDAs approved, pre-approval non-clinical testing was only performed in 3 cases (21%). NDAs approved by literature-only were approved across Divisions (Figure 3). Meetings with the FDA were a common occurrence, with 11 out of 14 Sponsors (79%) holding at least 1 meeting (up to 3 or 4 for several applications). Pre-submission meetings were the most common in the Division of Anesthesia, Analgesia, and Anesthesiology (DAAAP), where the average number of meetings was 2.75. Literature-only NDAs represent a unique opportunity for drug development, but some specific circumstances increase the success rates of this strategy. The number of approvals of these NDAs have been increasing recently, with 9 of the 14 (64%) approved in the last 5 years, corresponding to the Agency’s publication of the 2011 “Marketed Unapproved Drugs Compliance Policy Guide” that describes how the FDA intends to exercise enforcement discretion to remove drugs marketed in the US that do not have required FDA approval for marketing. Notably, for drugs previously marketed unapproved that are first to market with FDA approval, there is the potential for a period of de facto market “exclusivity” before the onset of competition while other products are forced to go through the same approval process.

Drugs with a long history of clinical use and significant clinical literature appear particularly amenable to the literature-only NDA strategy, which blends well with a push from the FDA for sponsors to gain approval for unapproved but long-marketed drugs. Most programs utilized pre-approval meetings with the FDA, suggesting that obtaining clear expectations from the Agency on the suitability of literature and the bridging strategy are critical to the success of this strategy. The key first step in assessing the scientific, medical, and regulatory information available for a product is to determine if a literature-based NDA is appropriate.

How do you know which products are right for submission as a literature-only NDA?

As the 505(b)(2) experts, Premier Consulting has experience with NDA applications that rely solely on published literature and also offer product ideation services. Our experts can help you determine if a literature-only strategy is a possibility for your drug development program based on publicly available information and regulatory precedent. Contact us to learn more.